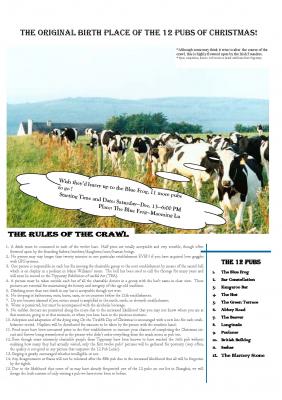 THE ORIGINAL BIRTH PLACE OF THE 12 PUBS OF CHRISTMAS!

crawl, this is highly frowned upon by the Irish Founders.

* Upon completion, donors will receive a faded certificate from Tipperary.

¨Wish they’d hurry up to the Blue Frog, 11 more pubs

THE RULES OF THE CRAWL

1.    A drink must be consumed in each of the twelve bars. Half pints are totally acceptable and very sensible, though often frowned upon by the founding fathers/mothers/daughters/sons/human beings.

2.    No person may stay longer than twenty minutes in one particular establishment EVEN if you have acquired beer goggles with GPS systems.

3.    One person is responsible in each bar for moving the charitable group to the next establishment by means of the sacred bell which is on display in a podium in ----- --------’s room. The bell has been used to call the throngs for many years and will soon be moved to the Tipperary Exhibition of useful Art (TEA).

4.    A picture must be taken outside each bar of all the charitable donors in a group with the bar’s name in clear view. These pictures are essential for maintaining the history and integrity of this age-old tradition.

5.    Drinking more than one drink in any bar is acceptable though not wise.

6.    No sleeping in bathrooms, seats, buses, taxis, or on counters before the 12th establishment.

7.    Do not become alarmed if you notice sound is amplified in the ninth, tenth, or eleventh establishment.

8.    Water is permitted, but must be accompanied with the alcoholic beverage.

9.    No sudden detours are permitted along the route due to the increased likelihood that you may not know where you are at that moment, going to at that moment, or where you have been in the previous moment.

10. Adoption and adaptation of the dying song On the Twelfth Day of Christmas is encouraged with a new line for each establishment visited. Napkins will be distributed for minutes to be taken by the person with the steadiest hand.

11. Food must have been consumed prior to the first establishment to increase your chances of completing the Christmas circuit and forever being remembered as the person who didn’t order everything from the snack menu in pub ten.

12. Even though some extremely charitable people from Tipperary have been known to have reached the 16th pub without realizing how many they had actually visited, only the first twelve pubs’ pictures will be gathered for posterity (very often, the quality is not good in any picture that surpasses the 12 Pub Limit).

13. Singing is greatly encouraged whether intelligible or not.

14. Any disagreements or fracas will not be tolerated after the fifth pub due to the increased likelihood that all will be forgottenby the eighth.

15. Due to the likelihood that some of us may have already frequented one of the 12 pubs on our list in Shanghai, we will forego the Irish custom of only visiting a pub we have never been to before.