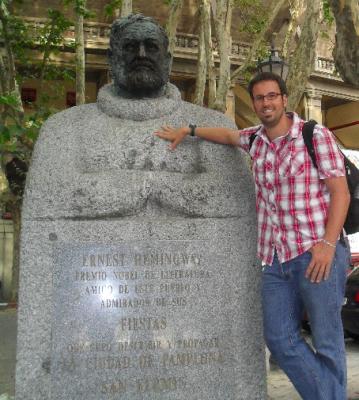 ¨Pamplona and Hemingway... Hemingway and Pamplona... They are intrinsically linked. The San Fermín festival fascinated him in 1923 when he was just a journalist from a Canadian weekly paper, the ¨Toronto Star¨. Everything he experienced in those first visits to Pamplona, in 1923 and 1924, went into his first major novel: The Sun Also Rises (Fiesta).

Ernest Hemingway came to the festival on nine occasions between 1923 and 1959. He wrote about it in journalist articles and in some of his novels, and as his literary star shone brighter, thousands of tourists from all over the world came and continue to come to Pamplona and its festival to get a taste of what the famous writer experienced and put down on paper.¨