Books: The Tao of Pooh by Benjamin Hoff 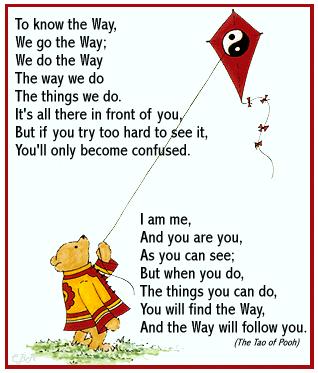 Lillian gave me this book long time ago. I tried to read it during the cruise that we took to Bermudas, but I gave up. Being in China was a good opportunity to give it another try. This time I finished it, but personally I wouldn´t recommend it. If you really want to learn about Taoism, get something more serious.

Well, Lillian liked it, my boss at the Foreign Language Department  -who teaches yoga, practices Tai Chi and is very ¨hippy¨-likes it, and the story is very popular. But being sort of a philosophy book I would classify it into the category of self-help books, and those kind of writings don´t attract me very much.

Many of the things that Taoism teaches make sense. There is an order in nature, and we need to be in harmony with it. Ying and yang, the unity and duality inherent in all seeming opposites, such as night and day, male-female, good-evil, …

Other ideas sound stranger. Like ¨non-action¨, things will get done.

Probably many of us are following Taoism without even knowing it.

Here you are some lines of the book:

In other words, you might say that there is more to knowing that just being correct. As the mystical poet Han-shan wrote:

Laughed at my poems.

The accents are wrong,

The meter is poor,

I laughed at his poems,

As he laughs at mine.

The words of a blind man

The next book that I am reading is a present from Iñigo Durana, and it is called ¨The Red Orchids of Shanghai¨. I already started it, and it seems to be pretty good.