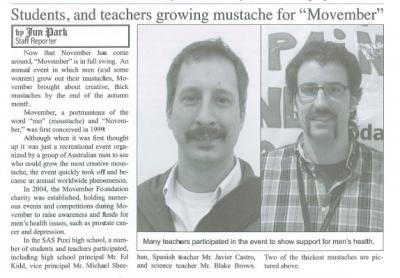 Now that Movember has come around, ¨Movember ¨ is in full swing. An annual event in which men (and some women) grow out their mustaches, Movember brought about creative, thick mustaches by the end of the autumn month.

Movember, a portmanteau of the word  ¨mo¨ (moustache) and ¨November¨, was first conceived in 1999.

Although when it was first thought up it was just a recreational even organized by a group of Australian men to see who could grow the most creative moustache, the even quickly took off and became an annual worldwide phenomenon.

In 2004, the Movember Foundation charity was established, holding numerous events and competitions during Movember to raise awareness and fund for men´s health issues, such as prostate cancer and depression.

Photo: Many teachers participated in the event to show support for men´s health.