Go shoot some stuff at a gun club 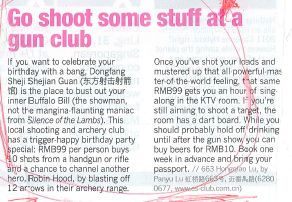 ¨GO SHOOT SOME STUFF AT A GUN CLUB

If you want to celebrate your birthday with a bang, Dongfang Sheji Shejian Guan is the place to bust out your inner Buffalo Bill (the showman, not the mangina-flaunting maniac from Silence of the Lambs.) This local shooting and archery club has a trigger-happy birthday party special: RMB99 per person buys 10 shots from a handgun or rifle and a chance to channel another hero, Robin Hood, by blasting off 12 arrows in their archery range.

Once you´ve shot your loads and mustered up that all-powerful-master-of-the-world feeling, that same RMB99 gets you an hour of sing along in the KTV room. If you´re still aiming to shoot a target, the room has a dart board. While you should probably hold off drinking until after the gun show, you can buy beers fro RMB10. Book one week in advance and bring your passport.