Let me introduce you the Webmaster of the project ‪#‎indonesiantarctic42k, Ruanth Chrisley Thyssen. 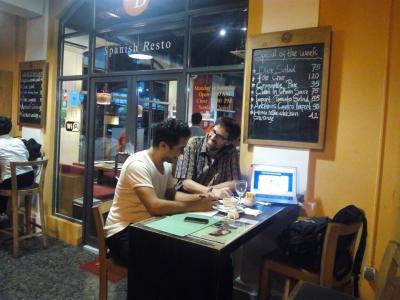 I am embarked in a project that consists on running 7 marathons in 7 continents and, if all works out, next November 24 2016 I will be in Antarctica completing the last stage.

Apart of the sport and travel project I want to raise funds for two NGO-s that are doing a fantastic job in Indonesia, where I live:

Our goal is to raise 12,000$, and for that purpose this Website has been designed:

And today I would like to introduce you the Webmaster, Ruanth Chrisley Thyssen, who is a genius.

I met Chris for the first time in the United Arab Emirates. He was a student at Dubai American Academy and I was his Spanish teacher during the school year 2007-08, year in which Chris graduated.

On September 2011 a group of 27 Spanish teachers published a book called ¨Spanish in the suitcase – Stories of Spanish teachers around the world¨, telling our experiences teaching this language in different countries. In my story about my teaching experience in Dubai I included the following part about Chris:

¨My classes look like Babel: out of 69 students I count passports from 25 countries, mostly from the US and Canada –it is an American School- but also from Russia, Pakistan, South Korea or France. There is only a local student.

The official language of the country is Arabic but at school we use English. Many of the students that choose Spanish –I teach secondary school, with kids from 15 to 18 years old- are learning already their third language. To give you an example, Patricia, my Philippine student, speaks Tagalog at home, English at school and with her friends, and she is learning Spanish. There is a case that calls my attention the most, and it is Chris in my Spanish Higher Level class, who speaks 5 languages.

- Five languages? How is that possible, Chris, if you are only 17?

- Well, the first language that I learned was Bahasa Indonesia, because I was born in Jakarta and when I was a baby I spent a lot of time with my maternal grandparents in Indonesia. I travel a lot to Netherlands to visit the family of my father and there I have to speak Dutch, because my paternal grandparents don´t know English. We moved to Brazil and my friends neither speak English, so I had to learn Portuguese. There was only one class in English at that school. After three years in Recife we moved to Argentina. I was two years in Rosario and I had 4 hours of English per day but, as it happened in Brazil, all my friends spoke Spanish. Every summer I travel to Indonesia and in the winter to Holland. The place where I have stayed the most is Dubai, 4 years. Ah, I also speak three Indonesian dialects, very different from each other, but I don´t know if that is important.

Chris is an example of that the American sociologist Ruth Hill Useem defined in English as ¨third culture kid¨. The term refers to people that as teenagers has spent an important period of time in one or two cultures different to his own. If, as I mentioned before, out of 69 students only one if from Dubai, we are talking about 68 kids that live in a third culture.¨

In 2008 Chris graduated and I moved to Shanghai (China). Later we got in touch again through Facebook and e-mail, because three students in that class, David Delgado, Christopher Tombrick and Chris Thyssen got together to complete ¨The Way¨ by bicycle, from Seville to Santiago de Compostela (Spain). I had walked the Way before and we were commenting some aspects about it.

It is neat that in that class there were three fantastic musicians and their idea, doing the pilgrimage by bike, was also to take their guitars and record later some songs. The group is called DC2 (because of David, Chris To. and Chris Th.) and here you can watch the first episode of a documentary that they recorded:

All the music that you hear is their own.

From iTunes you can download one of their songs, Camu´s Song, and in their Youtube channel you can enjoy other videos:

By chances of life, in August 2013 I moved to Yakarta and Chris also. That school year 2013-14 I had his sister Rhode in my Spanish class. It is not strange for a teacher to teach two brothers with some years differences, but it is not common that that happens in two different countries.

Being both of us in Jakarta we have been in touch, going for dinner sometimes or hiking a mountain.

The picture that you can see in this entry was taken in March 2016, at Plan B restaurant, in Jakarta. There I explained him the project that I had in mind and I asked him if he would be willing to design the Website for me. He liked the idea, he gave me the huge favor of designing it, and I love it! I hope that through it we can reach the goal of raising funds for Harapan Project and Kupu-Kupu Foundation!

If you need a professional photographer or a good Web designer, don´t hesitate in contacting Chris:

Great story to follow-up. It sends me back a few...few years ago. And I will add that while I am reading yours stories, I am in my hotel room in Gilli Trawangan. Isn't that a coincidence? Wish I could visit you Castro, but unhappily we are not visiting Jakarta.
I will check your site about your fund raising more thoroughly later. Hello to all of you.
Cheers,
Brigitte